The next issue of Coro Coro Magazine has been leaked on Japanese forums revealing new Mega Pokemon and a new Evolution type in the upcoming Pokemon Omega Ruby and Pokemon Alpha Sapphire games.

Joining Mega Blaziken are his comrades from Ruby and Sapphire, Mega Sceptile and Mega Swampert.

Mega Swampert keeps its Water/Ground type and gets the ability Swift Swim.

Also joining the Mega evolutions is Mega Diancie whose normal form was only officially revealed earlier this year. Mega Diancie’s ability is currently unknown and listed as ???. According to preliminary translations of Coro Coro Magazine, the Omega Groudon and Alpha Kyogre evolutions seen on the box art are actually a new type of Evolution similar to Mega Evolution. Instead of evolving, it’s more of a regression translated as Ancient Devolution. Instead of Mega Groudon or Mega Kyogre, the translation is more along the lines of Primal Groudon or Primal Kyogre. 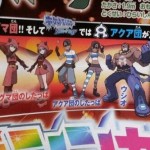 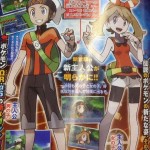 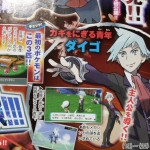 Brendan and May show off the new Mega Bangle which will Mega evolve your Pokemon in battle like the Mega Ring in Pokemon X and Y. The Mach and Acro Bike also make a return.

Steven Stone also returns, this time sporting a Mega Charizard X and looking for the secrets of Mega Evolution.

We’ll be sure to bring you more about Pokemon Omega Ruby and Pokemon Alpha Sapphire as it comes out!